A study of the characteristics of Islamophobic hate crime in Sweden – the nature of the offences, the people who have been subjected to them, who the perpetrators are (when possible), and the consequences of the crimes.

The Swedish National Council for Crime Prevention (Brå) has been instructed by the government to investigate the characteristics of Islamophobic hate crime. The aim is to provide improved knowledge that will strengthen the work to prevent racism, and Islamophobia in particular. 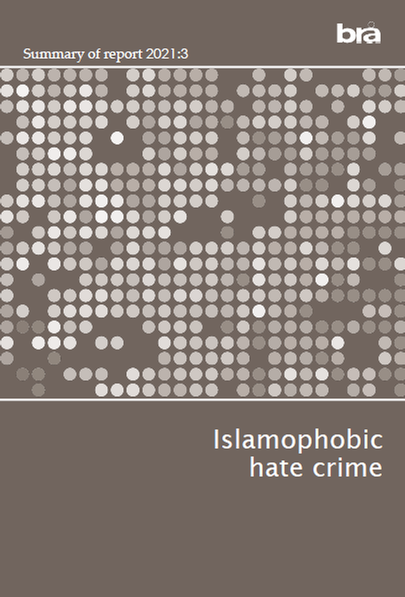 The main conclusion of the study is that Islamophobic hate crimes take many forms and are not restricted to any particular type of place, time or person. Among the police reports examined in the study, threats and molestation represent the largest crime category, followed by agitation against a population group, defamation, violent offences and graffiti.

The conclusion drawn on the basis of these findings is that Islamophobic hate crime, other forms of abusive behaviour, and negative attitudes and prejudice against Muslims can affect both Muslims’ daily lives and the condition of their lives in general. It is therefore important to take various forms of preventive action, not only to stem the occurrence of Islamophobic hate crime, but also to reduce the occurrence of negative, stereotypical perceptions and conceptions of Islam and of Muslims in general.

Brå’s commission from the government concerns describing the nature of Islamophobic hate crime on the basis of a broad perspective, rather than describing or attempting to identify its extent. For this reason, the study mainly employs a qualitative approach, and two primary data sources have been used to address the study’s research questions. The first consists of 500 cases that have been reported to the police. These data include police reports and investigations from the years 2016 and 2018, which have been identified in Brå’s hate crime statistics as featuring Islamophobic content. The second consists of more than 50 interviews that have been conducted with private individuals, representatives of Muslim congregations, associations and organisations, researchers and key informants working in the justice system. Almost four-fifths of those interviewed had themselves experienced exposure to Islamophobic hate crime.