The statistics are based on reported crimes that the police classified as hate crimes and where Brå identified hate as the underlying motive. The report is a descriptive compilation and comprises an investigation of the police’s hate crime classification, and an account of the hate crime motives Brå identified, as well as crime categories, type of crime scene, and the victim’s gender and relationship to the perpetrator. In addition to this, statistics were also reported on the regional distribution of the reported offences, i.e., divided across the police regions where they were registered, and statistics on the distribution of hate crimes per municipality, based on where the offences took place.

As of 2020, Brå’s statistics of offences reported to the police where hate was identified as the motive, constitute a comprehensive investigation of all police reports that the police classified as hate crimes. The statistics are based on a different data selection than Brå’s previous hate crime statistics, which means that the statistics in this report are not comparable with Brå’s previous hate crime statistics.1 It is important to note that the consistently lower levels of crime with hate as the underlying motive included in this report do not mean that there has been an actual reduction in the number of reported hate crimes, but that this is a consequence of a change in the selection of reports reviewed by Brå.

The changes to the selection and the method were carried out to increase the relevance of the statistics. The new statistics can be used as a more relevant basis for following up administrative decisions on reported crimes with hate as the underlying motive. The changes also make it possible to use hate crime statistics as a tool for following up operations, such as evaluating the police’s initial handling of reported offences classified as hate crimes. The statistics thus become more relevant to the police’s operational activities.

Distribution of motives for hate crime, percentage. Source: Hate crimes reported to the police in 2020

The most common crime scene in the police reports was a public place (20 percent), followed by the victim’s home, or in close proximity to it (19 percent), and at the victim’s place of work (11 percent). Hate crimes in digital environments were also common; chat, text message and phone (9 percent), social media (6 percent) and other online forums (2 percent) accounted for a total of 17 percent of the reported hate crimes. Another 10 percent of the offences took place in a school environment (physical or digital).

These reports largely related to crimes such as graffiti, malicious damage, and agitation against an ethnic or national group.

In 32 percent of the reports, the perpetrator was a person who was not known to the victim. It was also common for the relationship to be judged as being irrelevant (26 percent), which means that there was no relevant relationship between the victim and the perpetrator. This was usually due to the fact that the hate crime was not directed at a specific person, group, or activity. In 10 percent of the police reports, the perpetrator was a neighbour of the victim and in 8 percent a person who the victim knew by name or appearance. Relatively few of the reported hate crimes were committed by a school friend (3 percent), colleague (1 percent), friend/acquaintance (2 percent), relative (2 percent) or former partner (1 percent) of the victim.

Christophobic hate crimes were characterized by a significant share of unlawful threats and that the victim was often male. Nazi graffiti on churches was also common. 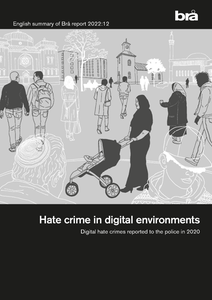 Download as PDF
Hate crimes reported to the police in 2020 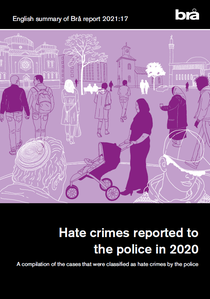 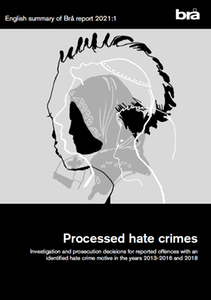 An examination of processing decision types for reported offences with a hate crime motive during the years 2013-2016 and 2018. 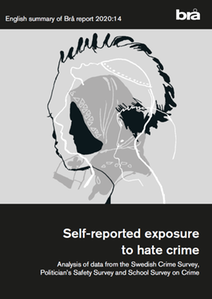 This report presents previously unpublished data from the Swedish Crime Survey, Politician’s Safety Survey and the School Survey on Crime.

This is how Swedish crime statistics work

It is easy to misinterpret crime statistics, and this is especially true when it comes to making international comparisons. Here are the reasons why.