Murder, manslaughter, and assault with a lethal outcome are usually jointly designated lethal violence. In 2021, 113 cases of lethal violence were confirmed in Sweden.

1.) The victim's sex is reported for the confirmed cases of lethal violence since 2011. In one of the cases in 2012, the victim's sex could not be established.

Since 2002, when Brå started producing the statistics, the level of confirmed cases of lethal violence has fluctuated between 68 and 124 cases. Up until 2014, the development of the number of cases was marked by an overall downward trend with relatively large variations from year to year. From 2015 onwards, the number of cases has been at a higher level than in previous years, which has broken the downward trend. The average of lethal violence for the last ten years is 103 cases per year

Against someone in close relationship (partner or ex-partner)

The majority (76 cases, corresponded to 67 %) of the confirmed cases of lethal violence in 2021 were reported in one of the major metropolitan regions of Stockholm, Väst and Syd. This level has fluctuated between 64 and 75 percent during the last ten years (2012 2021) 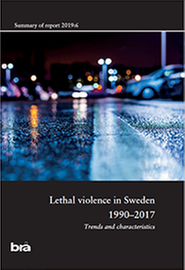 This study describes the characteristics of lethal violence in Sweden today (2014-2017) and its development from the beginning of the 1990s. 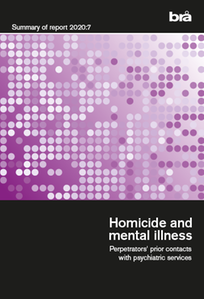 This report describes diagnosed mental health disorders among perpetrators of homicide in Sweden between 2005/06 and 2017.

A study of homicides arising from conflicts in the criminal milieu in the period 2005-2017. 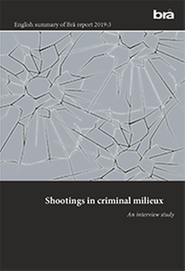