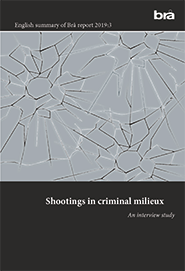 The study is based on three overall lines of enquiry:

The report does not provide any straight answers as to what can be done to fight gun violence. Our primary contribution is to provide a knowledge base which, in combination with other studies and data, can hopefully create better understanding for the occurrence of the shootings. This understanding is itself a condition for conducting crime prevention work. Based on the results of the report, we can, however, identify a number of areas which should be of specific importance to the preventive work.

In the report, we describe how the criminal milieu can be perceived as a relatively everyday affair into which the interview subjects have more or less become embedded. This underscores the fact that the milieu cannot be understood in isolation from the rest of society, but rather mirrors overall societal changes and conditions. Consequently, more overall efforts may be important, for example in socially disadvantaged areas.

We also see that gun violence serves not only as a means for strengthening one's position, but is also used to protect one's life. Concern over being shot appears repeatedly in the material. Consequently, it is also worthwhile to work to facilitate and stimulate desistance from the criminal milieu, for example by providing more support to persons who wish to desist than is currently the case.

In addition, the criminal milieu is maintained by the markets which constitute the principal economic activity in the milieu – primarily the drug market. In such case, focus should be placed not only on the availability of drugs – which could perhaps be regulated by combatting importation and smuggling – but also on demand. The reason for this is that conflicts which are based on, for example, competition for sales territory and customers, do not appear to be uncommon.

In and of itself, the access to guns and ammunition creates the conditions for gun violence.

Moreover, our material shows that the participants in the criminal milieu must always assume that everyone has access to guns, which appears to form how violence is used in the milieu. Crime prevention work should therefore be focused on further reducing the importation of guns and ammunition into Sweden. It is not possible to say whether this will lead to the use of other weapons instead of guns, which would mean that the violence would remain in place. However, with fewer guns in circulation, there is at least a possibility of reducing mortality in the criminal milieu.