Gun homicide in Sweden and other European countries

Viewed from a long-term perspective, it is well-established that, at least in Western Europe, homicide levels increased during the period 1960-1990 and have since declined. In Sweden, however, this downward trend has stalled, and since 2013 levels of homicide have once again been on the rise. This study compares recent trends in Sweden with homicide levels and trends in 22 other European countries with a focus on the period since the year 2000.

Press release: Gun homicide has increased in Sweden but not in the rest of Europe 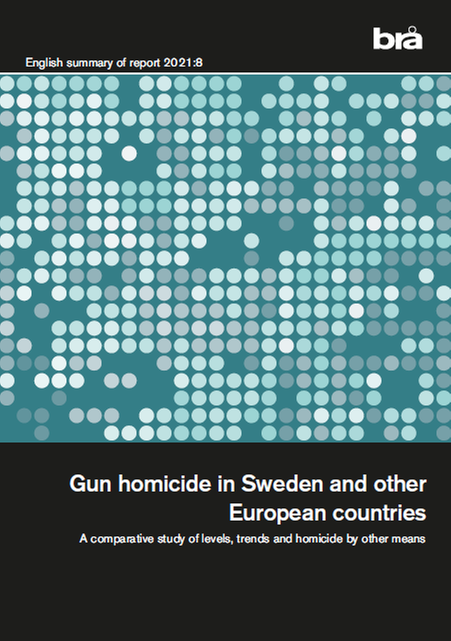 The results of the study’s analyses show that the general level of homicide has declined in virtually all of the countries examined during the period covered by the study. In countries where homicide levels were very high at the beginning of this period, i.e. the Baltic states in particular, but also the rest of the former Eastern Bloc and Finland, there has been a particularly marked decline in homicide rates, which has resulted in much smaller between-country differences in homicide at the end of the period examined. A similar decline and harmonization can also be seen for rates of gun homicide.

No corresponding increase in gun homicide elsewhere in Europe

The level of gun homicide in Sweden ranks very high in relation to other European countries, at approximately 4 deaths per million inhabitants per year. The average for Europe is approximately 1.6 deaths per million inhabitants. None of the other countries included in the study have experienced increases comparable to that noted in Sweden. Instead, continued decreases were observed in both total homicide rates and rates of gun homicide in the majority of these countries. Temporary increases can be seen in a few other countries, but these are restricted to periods of only a few years, and in none of these cases has there been such a marked and continuous increase as that observed in Sweden over several consecutive years.

Homicides against women and persons aged under 20 rarely involve guns

Gun homicides rarely involve victims under the age of 20, which is the case in all the countries examined and throughout the period covered by the study. In Sweden, an increase can be noted in this age group in 2019, from a very low level. This increase should be interpreted with caution however, since changes from one year to the next are not sufficient to constitute a trend.

The greatest sex differences in homicide are found specifically in relation to gun homicide, which rarely target women. Trends in gun homicide show a consistent decline for both women and men in most European countries, although the decline is more marked for men because levels of gun homicide against men were considerably higher than those against women at the beginning of the period examined.

Gun homicides outside the criminal milieu rare in Sweden

Research shows that the increase in gun homicide in Sweden is closely linked to criminal milieux in socially disadvantaged areas. Data collected within the framework of the European Homicide Monitor have been analysed in order to examine whether there have been any changes in the nature of gun homicides in Sweden and two other countries – Finland and the Netherlands.

A number of countries have documented problems with increasing gang crime (including Denmark and the Netherlands) without these problems being reflected, other than temporarily, in homicide statistics. The pattern that lies closest to the Swedish trend is found in an increase in knife violence in England and Wales between 2015 and 2018.

The final chapter in the report notes that the increase in gun homicides in Sweden cannot be viewed as part of an international trend. The increase is furthermore restricted to a very specific category of homicides – shootings in the criminal milieu – while other homicide types, including other types of gun homicide, have followed a declining trend for the greater part of the period examined in the study.

Sudden, temporary increases in homicide are primarily associated with conflicts linked to illegal drug markets, criminal gangs, and a lack of confidence in the criminal justice system. These factors are also characteristic of the type of homicide that has increased in Sweden, although they are also found in other European countries that have not experienced the same trend in gun homicide. Nor is it unique to Sweden that violence linked to illegal drug markets is concentrated to socially disadvantaged areas, or that there is an illegal trade in firearms. Further, the research describes both socioeconomic factors and access to weapons as important factors for understanding differences in homicide between countries (or between different areas of the same country), without them necessarily being able to explain changes in homicide rates over time.

On the basis of the existing research, it seems reasonable to conclude that the increase in gun homicide witnessed in Sweden may be the result of the emergence of a new group dynamic within the criminal milieu, whereby shootings have come to precipitate one another. Why this dynamic should have emerged just in Sweden remains unclear however.

At the same time, while the underlying causes of the trend remain difficult to explain, they have not occurred in a vacuum. The global decline in homicide appears to have stalled and an increase can be observed in a number of developed countries, at least outside Europe. Gun trafficking has been identified as a growing problem at the European level, and the same is true of the illicit drug trade. Together with the similarities noted with the recent increase in homicides in England and Wales, there are thus a number of indications that the homicide trend in Sweden may not in fact be a completely isolated phenomenon.

The Swedish National Council for Crime Prevention (Brå) has been instructed by the government to study Swedish levels and trends in gun homicide and homicide by other means, and to compare these with those found in other European countries.