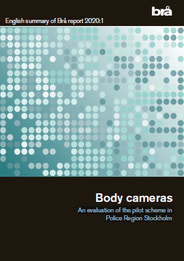 An evaluation of the pilot scheme in Police Region Stockholm. English summary of Brå report 2020:1

An evaluation of the use of body cameras in Police Region Stockholm.

In the spring of 2018, Police Region Stockholm, together with the Swedish Police Authority’s Department of National Operations, initiated a pilot scheme in which three hundred body cameras were distributed to police officers in Botkyrka, Rinkeby and Södertälje. The purpose of this initiative was to reduce the police officers’ exposure to threats, violence and harassment in these areas and to improve the work environment of patrolling police officers. Brå has evaluated the pilot scheme and studied how the cameras are used, whether they contribute to fewer incidents involving threats, violence and harassment aimed at police officers, whether the officers change their use of police powers and the extent to which the footage is used as evidence in preliminary investigations and court cases.

Brå’s overall conclusion is that the outcome is to some extent in line with the expressed intentions of the pilot scheme. The changes are, however, rather modest, especially if the high expectations for the cameras and the extensive investment involved is taken into account.