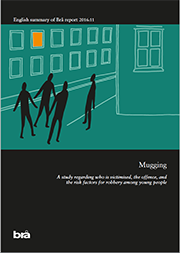 A study regarding who is victimised, the offence, and the risk factors for robbery among young people. English summary of Brå report 2016:11.

This study addresses robberies victimising private individuals, known as mugging, which is the most common type of robbery.

The overall purpose is to map the characteristics and trends in respect of the robberies, as well as to contribute knowledge regarding who is victimised and who commits the offence. The study is based on information from Brå’s Swedish Crime Survey (Nationella trygghetsundersökning) (NTU), which is an annual survey regarding victimisation, addressed to individuals 16-79 years of age. Other material includes the Swedish School Survey on Crime (SUB), which is a self-reported study conducted among students in year nine. Information has also been obtained from a selection of police reports regarding mugging.

The central enquiries are