Crime does not move around the corner 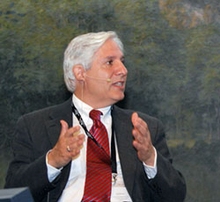 What Weisburd discovered, was that crime is concentrated to crime hot spots and when the police officers were asked to reduce crime they went to these places.

Since then, David Weisburd has focused a great deal of his research on the importance of place in policing, which also happens to be the name of his latest report that has just been published by Brå.

When studying hot spots in Jersey City, New Jersey back in the early 1990s, he discovered that the traditional notion of areas being overall good or bad was not entirely true. The reality of it was far more complex.

— When police officers told us 'this is a bad area', we did find a great deal of crime, but it was concentrated at certain street segments, says Weisburd. In between, streets were fairly quiet. In the same manner, crime hot spots could be found in areas considered to be good.

Professor Weisburd presents a map of crime hot spots in Jersey City that gives us a whole new idea of how crime is distributed throughout a city. Instead of larger areas designated by red and green as bad or good areas, the map is sprayed with smaller crime hot spots spread all over the city. The green representing lower levels of crime is the predominant colour, even in the so-called bad areas.

So, what can we make out of this? Well, to begin with, Weisburd argues that we should not necessarily connect crime with larger geographical areas, such as entire neighbourhoods. It is on smaller locations that police should focus their interest; street segments even, rather than entire streets.

Another study was done in Seattle at a time when overall levels of crime were dropping in the city. Here, it could be seen that crime rates actually went up in certain street segments, even though there was a substantial drop for the city as a whole.

— It turned out that less than one per cent of the streets segments in Seattle stood for over 20 per cent of crime, says David Weisburd.

So why is it that crime is so closely connected with specific places? New research points to a number of factors that can attract crime — for instance the presence of shopping malls or places where young people gather, a high number of employees, high property rates, etc.

— There are also factors that indicate the opposite. The higher the number of registered voters in a street segment, the lower the risk of high crime rates in that place, says David Weisburd.

Which leaves us with the question: can police really make a difference?
To answer this question, Weisburd and his colleagues went to Minneapolis to study the effects of concentrating police efforts at randomly chosen crime hot spots, while retaining normal police presence at other hot spots for use as a control group. There was a considerable difference between the two groups of hot spots included in the study. Increased police presence clearly generated a positive effect — that is right up until the arrival of summer vacations. When the police officers went on holiday, crime levels went up to the previous levels. This, argues Weisburd, is a good example of police making a difference.

The research of David Weisburd also shows that crime does not move around, something that has previously been a foregone conclusion among criminologists. On the contrary, crime is connected with specific places that have the right preconditions.

— The apparent was not so apparent, says David Weisburd. Police presence in specific location does make a difference. Crime does not move around the corner.

The Importance of Place in Policing
More publications