Strategic offences among youth in the 2010s

and factors of significance for desistance from crime. English summary of report 2021:5

In this report, Brå continues with the study of so-called strategic offences – i.e. the offence types in a debut conviction that best predict continued high-frequency offending. 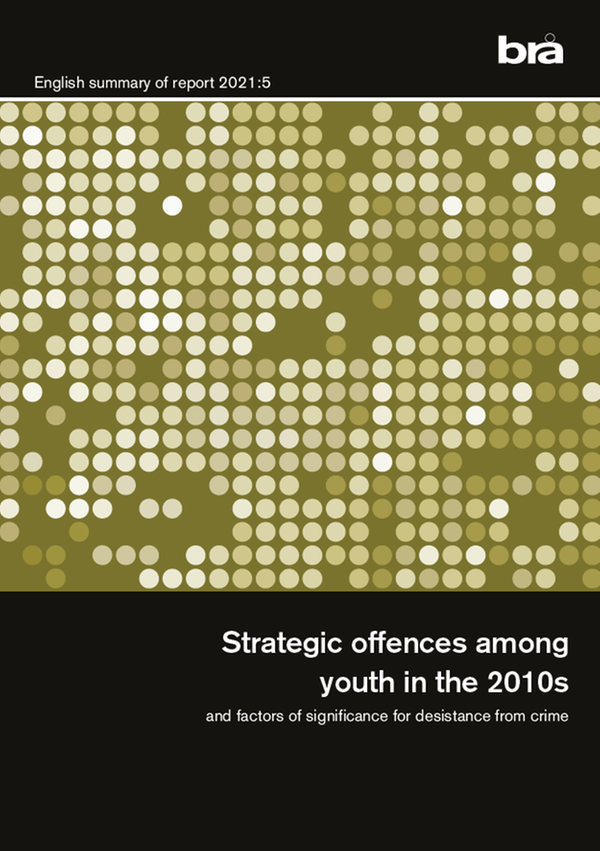 The Swedish National Council for Crime Prevention (Brå) has once again been instructed by the government to study so-called strategic offences – i.e. the offence types in a debut conviction that best predict continued high-frequency offending. Brå has conducted similar studies on two previous occasions (Brå 2000, Brå 2011). The government has also instructed Brå to present a summary of the existing research concerning factors that improve the opportunities for individuals to desist from a criminal career, with a special focus on young people.

Developing knowledge about strategic offences was originally intended as a tool for the social services to use in their assessments. Brå’s first study from 2000 showed that one-third of all 15-17 year olds whose first conviction was for car theft subsequently came to belong to the small group that was together responsible for more than half of all convictions for crime. Car theft therefore constituted a strategic offence in as much as it was strategically correct to target actions against youths who committed this offence if there was a desire to reach those who were most at risk of becoming high-frequency offenders. Today, however, robbery has become the most strategic offence among young males, together with gross theft. Among girls, too few were convicted of robbery in connection with their debut conviction for this type of crime to be included in the analysis.

Robbery, which is the most common of the strategic offences, is characterised by the perpetrator not only stealing but also being prepared to use violence in order to obtain another person’s property. In this sense, robbery is a more ‘advanced’ offence than theft, because it is committed by youths who have passed an emotional/moral threshold for what they are prepared to do at a relatively early age. Similarities also exist with regard to violence and threats against a public servant, as well as gross theft, where one of the legal prerequisites is that the offence is of a particularly dangerous or ruthless nature.

As regards the capacity of the strategic offences to genuinely predict high-frequency offending, it must be borne in mind that only a relatively small number of offenders go on to develop a long and active criminal career, regardless of their debut offence. Even among those youths with debut convictions for robbery, the proportion who had no subsequent convictions was as large as the proportion that went on to become a high-frequency offenders.

Download the report to find out more Pdf, 519 kB.