Effectiveness of Street Lighting in Preventing Crime in Public Places

An Updated Systematic Review and Meta-Analysis

Does improved lighting reduce levels of crime? What do the strongest evaluations tell us? These questions are answered in this systematic review, which examines the strongest available research to date.

Darkness in built up areas can contribute to feelings of personal insecurity, and can produce favorable conditions for vandalism and theft, including bicycle thefts and thefts from vehicles. The crime preventive effects of improved lighting in public places are therefore often discussed, and measures to improve lighting are often implemented as a means of combating crime.

The Swedish National Council for Crime Prevention (Brå) has commissioned distinguished researchers, led by Professor David Farrington at Cambridge University, to conduct a series of international reviews of the research published.

In 2007, Brå published a systematic review on the effects of improved lighting. The publication was based on the 13 studies available at the time whose methodology was sufficiently rigorous to meet the inclusion criteria for a systematic review. This report comprises an updated review, which now includes a total of 21 studies. The study follows the rigorous methodological requirements of a systematic review and statistical meta-analysis. Even though important questions remain unanswered, the study provides a vital and far-reaching overview of the available evidence on the preventive effects of improved street lighting. 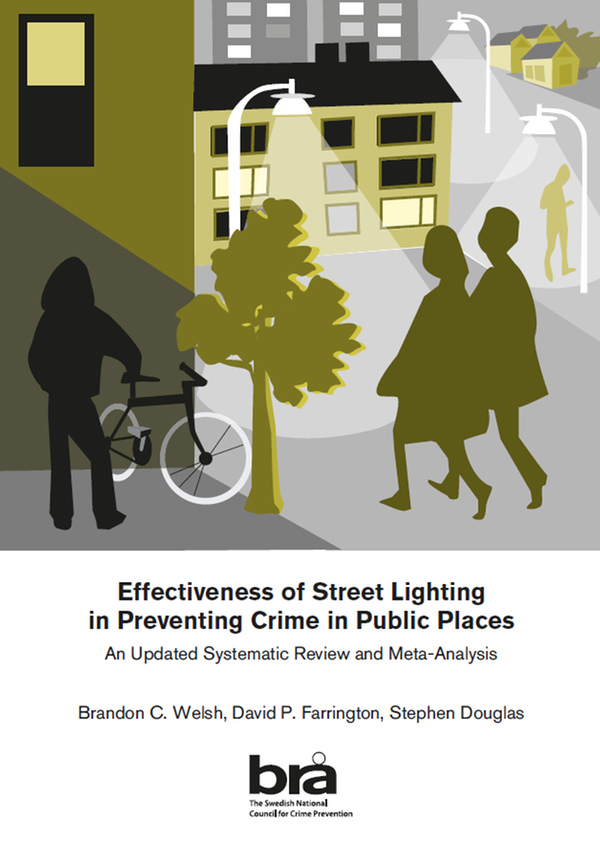 In pooling the effects of 17 studies that could be included in the meta-analysis, it was found that street lighting led to a significant 14% decrease in crime in experimental areas compared with comparable control areas. While not every study was effective in preventing crime, desirable effects of street lighting interventions were greater in studies that measured both night and day crimes than in studies that only measured night crimes. This translates to a significant 18% decrease in crime for night/day studies compared to a non significant 3% decrease in crime for night only studies. These findings suggest that a theory of street lighting focusing on its role in increasing community pride and informal social control may be more plausible than a theory focusing on increased surveillance or deterrence.

Many of the recommendations that we made 14 years ago (see Farrington and Walsh 2007) for research on the effects of street lighting on crime are still needed today. For example, future evaluation studies should include several experimental areas and several adjacent and comparable non-adjacent control areas. Adjacent areas are needed to investigate crime displacement and diffusion of crime prevention benefits. In addition, a long time series of crimes should be studied to investigate pre-existing crime trends, as well as the extent to which any effects of street lighting interventions persist or wear off over time. It would also be highly desirable for researchers to carry out more cost-benefit analyses of street lighting interventions. This would allow for a number of key policy questions to be addressed, such as: Do the monetary benefits to society from decreased crime rates outweigh the monetary costs of implementing and maintaining street lighting projects? To whom do the monetary benefits (or costs) accrue?

Compared to years past, it would seem that an even stronger case can be made today for street lighting interventions to be part of national and local crime prevention policy. A larger body of high quality evaluation research, implemented in a range of high-crime public places, some evidence of value for money, and the enduring impact on crime, especially property crimes, all point to the policy significance of street lighting interventions.

Previous reports in the series

5. The Influence of Mentoring on Reoffending

14. The effects on re-offending of custodial versus non-custodial sanctions

The effects on re-offending of custodial versus non-custodial sanctions
Download as PDF An updated systematic review of the state of knowledge Systems of...

School Bullying, Depression and Offending Behaviour Later in Life
Download as PDF An Updated Systematic Review of Longitudinal Studies The impact of...

Preventing Repeat Victimization
Download as PDF A Systematic Review The effects of initiatives to prevent repeat...

Effectiveness of public area surveillance for crime prevention
Download as PDF Security guards, place managers and defensible space A report on the...

Treatment effectiveness in secure corrections of serious (violent or chronic) juvenile offenders
Download as PDF A systematic review and meta-analysis of 31 different evaluations. The...

Effectiveness of programs designed to improve self-control
Download as PDF A systematic review of different 34 programs and their results. Much...

Effectiveness of interventions with adult male violent offenders
Download as PDF A meta-analysis of a number of studies aiming to prevent criminal...

The influence of mentoring on reoffending
Download as PDF A systematic review of a number of studies on mentoring and its effects...

Effectiveness of treatment in reducing drug-related crime
A systematic review Download as PDF The principal objective of drug treatment programs is...