A study of the preconditions for sharing information between police, social services and other actors in order to prevent crime.

Sharing information and the question of confidentiality between government agencies and municipalities is a question that actors collaborating in crime prevention are grappling with. There has long been a desire to facilitate for social services and the police to share confidential information for crime preventive purposes. In 2013 this led to the introduction of a provision in Chapter 10, Section 18a of the Public Access to Information and Secrecy Act (OSL 10:18 a) permitting confidentiality to be breached in order to share information for purposes of local crime prevention. Under the new provision, social services staff may, under certain circumstances, divulge information concerning an individual under the age of 21 to the police in order to prevent crime.

Brå has been tasked by the Government with studying the preconditions for sharing information between police, social services and other actors in order to prevent crime. The background to this mandate is that restrictions on opportunities to share information due to confidentiality have recurrently been raised as an obstacle in local crime prevention efforts. However, there is a lack of an overall picture of the extent to which there are challenges and needs for change. 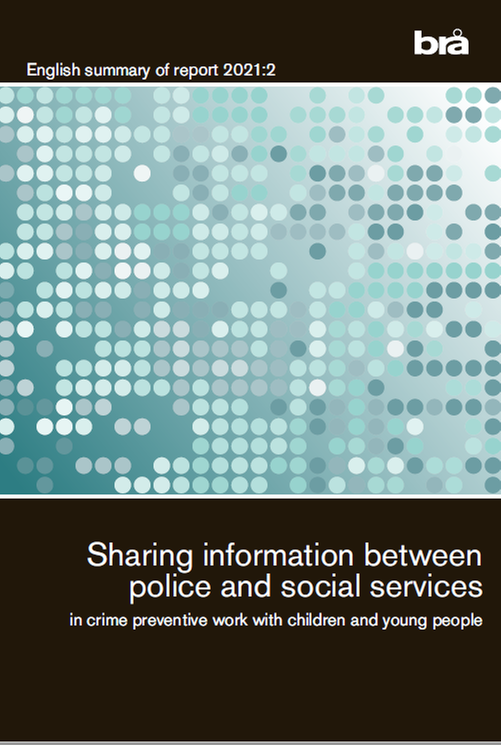 Here are some of the main conclusions of the study:

This study has examined the circumstances in which information can be shared between the police and social services, and to a certain extent other actors, in crime preventive work concerning children and young people. It has also examined how the provision allowing confidentiality to be breached in Chapter 10, Section 18 a, OSL is being applied in practice.

Brå has surveyed the information sharing problems identified by the police and social services, their awareness of and application of the confidentiality legislation, as well as their needs, strategies and suggestions as to how to solve the problems.

The data on which the study is based include interviews with 118 people, conducted with representatives of national and regional organisations and with relevant actors in seven different municipalities. The report is also based on a survey sent to the Swedish Police Authority and heads of social services units in half of Sweden's municipalities.