Reported and cleared rapes in Europe

Measuring and comparing the incidence of rape in different countries can provide knowledge which can be used to combat such crime. However, this requires that the available statistics provide comparable data from the different countries.

According to the EU’s statistics, Sweden has long had the highest number of rapes per capita. According to the statistics, the percentage of rapes cleared in Sweden is also low. In this study, Brå shows that there are differences in both how rape legislation is worded and how statistics are recorded, which means that the figures from different countries are not comparable.

The way in which statistics on the percentage of reports cleared are recorded also varies between the countries in Europe. There are, for example, variations in what is considered a cleared offence. In some countries, a reported rape is counted as cleared if someone has been prosecuted for the offence, while in other countries it is sufficient to have a suspect.

Brå also recalculates certain figures to illustrate how various factors, other than the actual incidence of rape and the effectiveness of the criminal justice system, affect the statistics on reported and cleared rapes, respectively. The differences between Sweden and other countries are then greatly reduced.

Brå hopes that this report can contribute to a more balanced and fact-based discussion on the extent of rapes reported to the police in different countries, as well as how criminal justice systems handle them. The report is intended for both Swedish and foreign readerships. We hope that it will prove useful to both criminal justice systems and others with an interest in the matter.

The original report is available in Swedish Pdf, 2 MB. 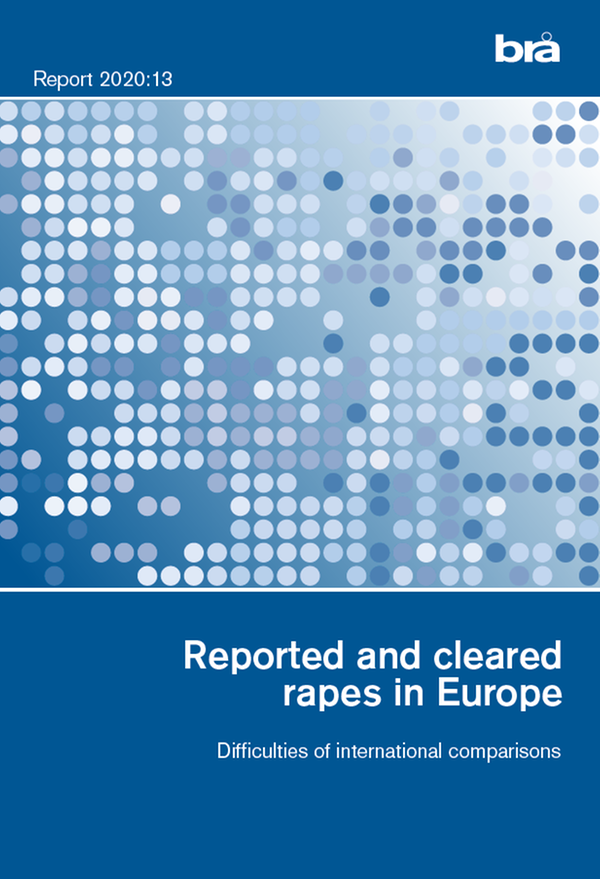 From the report: Brå’s assessment

Brå’s overall assessment of the review is that the differences between Sweden and other European countries as regards the incidence of rape are smaller than indicated by Eurostat’s report statistics. If the legal conditions and statistical methods had been the same as in Germany, Sweden would rank somewhere in the middle of the report statistics from Eurostat. Nor does Sweden stand out in FRA’s survey when it comes to the percentage of women who have stated that they have been raped at some point. Out of the total of 27 countries included in the survey, Sweden is among the 10 where the stated prevalence is between 10 and 12 percent. In other words, there is no support for the claim that Sweden deviates significantly from other countries in north-western Europe when it comes to the incidence of rape.

However, according to both the adjusted report statistics and the victim survey, more women are raped in Sweden than in countries in southern and eastern Europe, such as Spain, Portugal, Poland and Greece. It is impossible to rule out that these differences are due to more rapes actually taking place in Sweden. However, as previously mentioned, it could also be due to women who are raped in Sweden having a greater propensity to report the incident to the police and more willingness to talk about it in a victim survey (as well as being more aware that they have been subjected to sexual assault and therefore a criminal act).
Consequently, there is no infallible source of knowledge with which to compare countries when it comes to the incidence of rape. However, in a comparison between report statistics and victims of crime surveys, Brå’s assessment is that a well-executed European victims of crime survey is a better source of knowledge than Eurostat’s report statistics.

Yes, according to statistics from Eurostat, the EU’s statistics agency, between 2013 and 2017 Sweden and England & Wales had the highest figures in Europe for the number of rapes reported to police per 100,000 inhabitants. According to the statistics, Sweden also has a low detection rate for rape cases in comparison with many other countries in Europe.

It is against this background that the Swedish National Council for Crime Prevention (Brå) has conducted this study. The aim was to establish whether the figures that the different countries submit to Eurostat are actually comparable with each other and whether the picture changes if attempts are made to render the figures more comparable.

To highlight the problems that arise when comparing the statistics from different countries on reported rapes and case outcomes, but also to illustrate how other factors affect the statistics, beyond the actual incidence of rape and the effectiveness of the justice system.

Brå, the Government and the Ministry for Foreign Affairs are often asked questions about why Sweden stands out in the rape statistics. The report is an attempt to provide better information for use in answering such questions. It is also our hope that the study will contribute to a more nuanced and fact-based discussion about the numbers of rapes and other sexual offences reported to the police in different countries.

We have been able to identify two factors that have a major impact on the reporting statistics in different countries: the legal definition of rape and the method of recording the statistics. Sweden would end up somewhere in the middle of the European statistics on reported rapes if we had similar legislation and the same statistical recording practices as Germany, for example. Similar adjustments to the figures on detected offences (clear-up rate) in different countries also indicate that the national variations are considerably smaller than the available statistics suggest.

The legal definition of rape has a major impact on the figures for the number of reported rapes in the statistics. In many European countries, for example, violence is required in order for the offence to be classed as rape, while other countries also include acts in situations where the victim was particularly vulnerable, such as being heavily intoxicated. Around 40 per cent of the reported incidents of rape committed against women in Sweden in 2016 involved no violence, relating instead to exploitation of a particularly vulnerable situation. In 2018 Sweden became one of only a few countries in Europe to adopt a law on consent. This is likely to also affect the number of incidents that are recorded as rape in Sweden.

These differences also have a major impact on how many reports are recorded in the statistics. If, as in many European countries, the police do not record reports of rape that they believe did not happen or did not meet the legal threshold for being defined as rape, this will reduce the number of reports. In Sweden, however, the police record every report in which a person says that a rape took place. The number of rapes reported will also be uncommonly high in Sweden due to the fact that repeated incidences of rape that take place within the confines of a close relationship are counted as separate offences in the statistics. In many other countries, these rapes are counted as one offence.

Not everyone who is raped reports this to the police. This means that differences in willingness to report can have a significant effect on how many reports the police receive. It is impossible to say how many offences go unreported in the various countries, as we do not know the real number of rapes in any country. There are, however, indicators that the proportion of victims who report sexual offences is relatively high in Sweden. This is because Sweden ranks highly on three factors that are covariant with elevated levels of reporting, namely public trust in the justice system, a clear rejection of “rape myths” and a high level of gender equality.

Public crime surveys provide another source of knowledge about crime. Unfortunately, there are very few European crime surveys to go on and those that do exist have shortcomings in terms of both sampling and methodology. The latest such study conducted by the European Union Agency for Fundamental Rights (FRA) dates from 2012 and relates specifically to the prevalence among women. The survey asked women about their experience of gender-based violence since the age of 15. The proportion varied between 3 per cent of respondents in Croatia and 14 per cent in the Netherlands. Generally speaking, the percentage of women who disclosed having experienced rape was lower in the southern countries compared with those in the north, and particularly low in the countries of the south-east. Ten of the 27 countries revealed a figure of between 10 and 12 per cent, including Sweden at 11 per cent.

On the question of detection (clear-up) rates, Brå’s analysis covers just five countries: Sweden, Norway, Denmark, England & Wales (as a single unit) and Germany. According to the statistics from these countries, the proportion of reported crimes detected in these countries in 2017 ranged from 80 per cent in Germany and 57 per cent in Denmark to one third in Norway, 11 per cent in Sweden and 3 per cent in England & Wales. Similarly when considering reporting, the differences are largely explained by the differences in the method of counting. For one thing, there are variations in what counts as a “detected” offence. Some countries consider a crime to have been detected when a suspect has been identified, while in others, such as Sweden, someone has to be prosecuted for the offence in order for it to count. In addition, the proportion of detected offences will naturally be lower in countries with a more extensive method of recording the number of reports. Following adjustments similar to those concerning reported offences, the variation in detection between the countries drops to between 7 and 13 percent on average over the period 2013–2017. Sweden and Germany come in at 7 per cent.