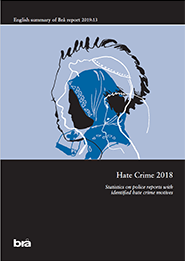 The Swedish definition of hate crime has varied over time, and between different agencies, since the term was originally introduced in Sweden in the late 1990s. In 2015, the Swedish National Council for Crime Prevention (Brå), the Swedish Police and the Swedish Prosecution Authority concluded that the term hate crime is defined by three legal provisions; agitation against a population group, unlawful discrimination, and the so-called penalty enhancement provision.

The penalty enhancement provision means that all types of crime may constitute hate crimes if a motive for the offence has been to aggrieve a person, a population group or another such group of persons because of race, colour, national or ethnic origin, creed, sexual orientation or transgender identity.

What constitutes a hate crime is therefore dependent on the offender’s motive, and since it could be any type of crime, there are no specific offence codes for recording hate crimes. The police’s computer system for the registration of police reports does provide a space for officers to mark offences as potential hate crimes, but this was not introduced for statistical purposes. This means that the hate crime statistics cannot be collated generically, but instead require the use of a method specially developed for this purpose. The method employed was originally developed by the Swedish Security Service in the early 1990s. In 2006, the Swedish National Council for Crime Prevention (Brå) took over the method along with responsibility for maintaining the statistics.