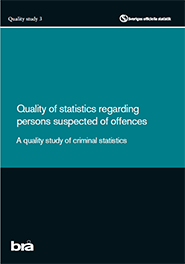 Quality of statistics regarding persons suspected of offences

In order to render the statistics of suspected offences more usable from an operational perspective, it is recommended that all persons suspected of offences as well as all processed suspicions of having a committed an offence be reported. In conjunction with the revision, it is also proposed that the statistical products be divided into two separate products.

Based on the results of the quality study, it is also recommended that Brå cease producing statistics regarding the population of persons suspected of offences who continue to be suspected of having committed an offence. Instead, it is proposed that individuals with a prosecution decision be reported; this population is more closely tied to operations and thus more relevant to explore, and is also a population which can be produced with higher quality. In addition, it is proposed that processed suspicions of offences be reported on the basis of segments corresponding to those in the statistics for processed offences.

In conjunction with a revision of the statistics, sections of the previous statistics during a transitional period should be revised in tandem with new revised statistics in order to promote comparability and to render it possible to analyse the effects of the revision.