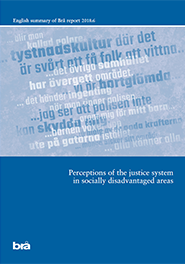 Perceptions of the justice system in socially disadvantaged areas

Socially disadvantaged areas are characterized by, among other things, a large percentage of residents with low socioeconomic status, and criminal elements that have significant impact on the local community. In this report, Brå has studied confidence in the justice system, and the sense of safety among residents in areas which the police identify as socially disadvantaged.

The study illuminates problems in the investigated areas that must be seen as exceptional in relation to most other residential areas. There are open sales of narcotics, vandalism, littering, and traffic offences affecting the residential environment. Some of the areas are periodically subject to very serious violent criminality. Crime and public disorder have a negative impact on the residents’ sense of safety and image of the police. There are also signs of structures, mainly criminal, that run parallel with, for example, the justice system. At the same time, when considering crime rates and confidence in the justice system, the results of the NTU (SCS, the Swedish Crime Survey) processing do not indicate any general deterioration in the 61 areas over time. However, many residents – including those who feel relatively safe – talk about the impact on their everyday life in the interviews. Many also communicate a general feeling that their area is forgotten or treated differently than other areas, or society as a whole.

Brå concludes that both the law enforcement and crime prevention work need to be more effective. Residents in the socially disadvantaged areas have the same rights as residents in other areas to a calm and safe residential environment. To a significant degree, higher rates of distrust of the justice system and residents feeling unsafe can be seen as a reflection of the concentration of crime and public disorder in the studied areas. Brå concludes that the justice system and other parties need to develop new strategic methods and become better at identifying the hidden parallel societal structures.