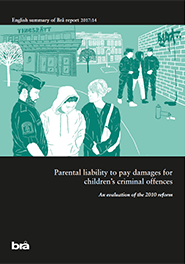 In 2010, parents with custody of a child became subject to more rigorous liability to pay damages in Sweden. In 2016, the Swedish National Council for Crime Prevention (Brå) was instructed by the Government to evaluate the reform.

This is a summary of the original Swedish Brå report 2017:14

The increased parental liability to pay damages has led to a series of problems in respect of application. The evaluation also shows that it is unlikely that the reform has attained its intended crime preventive effect. Moreover, it has led to a series of negative effects for injured parties, parents, and the criminal justice system. In Brå’s
opinion, there are thus two paths available.

The first is to discontinue primary liability for parents of children who are ordered to pay damages due to a criminal offence. The second is to retain primary liability, but to adjust the rules to reduce some of the negative effects identified by Brå. If the primary liability remains, Brå is of the opinion that the following measures must be taken: