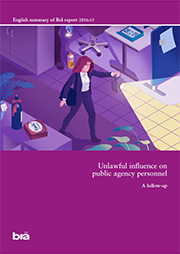 The study addresses unlawful influence from external customers and clients, i.e. harassment, threats, violence, vandalism, and corruption where the victim perceives the purpose being to influence the discharge of official duties.

This is both a form of follow-up on, and an expansion of, a previous study from 2005 (Brå 2005:18). The nature of the expansion is that this survey is significantly larger, both in terms of the number of respondents and the number of investigated organisations.