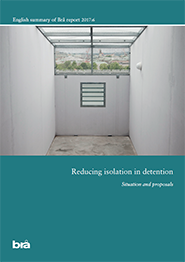 Sweden has been the object of criticism because a significant number of persons in detention are in isolation. This report studies detention and the conditions in Swedish detention centres.

On the other hand, it is more common for this group than for adults to be subject to restrictions – specifically, in a full 81% of the cases. Since the 1990s, Sweden has been the object of criticism from both the UN and the Council of Europe because such a significant number of persons in detention are in isolation by virtue of a decision regarding restrictions. The UN Committee on the Rights of the Child has also criticised Sweden’s isolation of children who are placed in detention and custody, and has exhorted Sweden to immediately cease isolation for all children and to amend its legislation to prohibit the isolation of children.