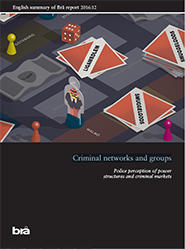 “Organised crime” is an expression which is used freely in public debate in Sweden. However, the term encompasses a host of different phenomena and forms of organisation, and the import of “organised crime” thus varies depending on who uses the term and how, and when, the term is used.

This report presents a theoretical framework – a conceptual structure – for the various forms of networks, groups, and phenomena that usually fall under the larger “umbrella” known as organised crime.

The purpose of the categorisation is to make it simpler to describe and understand power structures, criminal markets, and the criminality which is carried out by different forms of networks, constellations, and groups.

The second and third parts of the report apply the conceptual structure to various forms of organised crime on the basis of some 60 interviews with police employees and a review of some 60 intelligence reports. This means that the descriptions of organised crime provided in the report articulate the perceptions of the interviewed police employees.

The fourth and final part of the report provides overall reflections. An appendix to the report sets forth police employees’ ideas for measures against various forms of organised crime. These are based on three seminars which were conducted with police employees in Stockholm, Gothenburg, and Malmö.