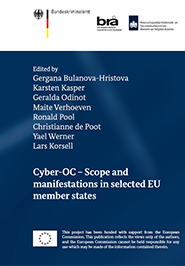 Worldwide the digitalisation of society is proceeding rapidly, while influencing almost all areas of life. Since law-abiding society continuously interacts with digital-based devices and tools that are often connected to the internet, it would be naive to think that the criminal world would act differently.

The threats arising from different types of cybercrime are real and constantly evolving, as the internet with its anonymity and borderless reach provides new opportunities for physical and virtual criminal activities. We can see complex cybercriminal networks connecting subgroups and also single individuals that are active on, through and against the internet. At the same time there are also ‘offline’ criminal organisations using the internet to facilitate their activities and to increase their profit.

Even so-called ‘traditional’ organised crime groups are widening their criminal portfolios by committing cybercrime. By constantly evolving online opportunities, their acts of ‘traditional crimes’ become even more far-reaching and damaging, thus benefiting the criminal organisation. It is not only the involvement of organised crime in cybercrime that is dangerous, but also cybercrime committed in an organised manner.

Cyber-OC represents the convergence of these two phenomena. Despite the huge threat arising from its cumulative character, Cyber-OC is frequently underestimated and differently defined even by law enforcement authorities.

The central criminological research institutes of Germany, the Netherlands and Sweden – the Criminalistic Institute of the Federal Criminal Police Office (BKA), the Research and Documentation Centre (WODC) of the Dutch Ministry of Security and Justice and the Swedish National Council for Crime Prevention (Brå) – conducted extensive empirical research to enlighten the links and convergence between cybercrime and organised crime.

The project “Cyber-OC – Scope and manifestations in selected EU member states” was funded by the European Union Programme ‘Prevention of and Fight against Crime (ISEC)’ for the duration of two years (from April 2014 to March 2016). This book contains the case studies of the three project partners, a common concluding chapter as well as an extensive literature review. This volume provides essential insights and police-relevant findings concerning the crime phenomenon of Cyber-OC.