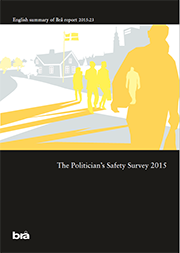 The level of victimisation among all elected representatives, regardless of age, gender, or party membership, is higher for the 2014 election year than for 2012. On the other hand, one sees a change in the perpetrator’s membership in a group and motive. The reporting rate must increase both to strengthen the preventive work as well as to prevent elected representatives accepting victimisation as normal.