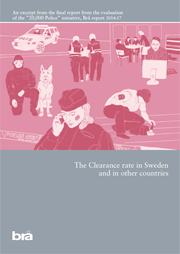 The Clearance rate in Sweden and in other countries

English summary of the final report from the evaluation of the ”20,000 Police” initiative, Brå report 2014:17

In this article we compare the number of reported offences per 1,000 of population in Sweden, and the proportion of cleared offences, with the corresponding figures for five other European countries.

The aim is to find explanations for why Sweden has a lower clearance rate than the other countries, despite the fact that victim surveys show that real crime levels are roughly the same.

One factor of relevance to differences in the clearance rate is the issue of differences in the way the police register crimes. In Sweden, for example, the method used to count the number of reported offences is less restrictive than those employed in the other countries. Several of the countries also use a definition of cleared offences that differs from that employed in Sweden. In some countries, it is sufficient to have registered a suspect on reasonable grounds for the offence to be considered cleared. In Sweden, however, an individual must either have been prosecuted for the offence or issued with a summary sanction order or a waiver of prosecution.

Finally, the chapter presents an alternative method of measuring police effectiveness in the countries studied, namely the number of conviction decisions per 1,000 of population. Using this measure, Sweden is no worse than the other five countries; in fact, all of the countries lie at approximately the same level.