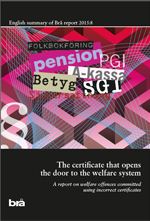 The certificate that opens the door to the welfare system

What are the consequences of the interdependency of the authorities within the welfare system when it comes to preventing and fighting crime? The focus of this study is on incorrect certificates which are used to commit benefit offences and fraud.

The Swedish welfare system has been built up over the course of many years. In this system, the primary purpose of which is to secure the individual’s security in many phases of life and situations, including childhood, parenthood illness, unemployment, disability, and old age. The welfare system consists of many public authorities, municipalities, and organisations; their mandate is to pay compensation and benefits to individuals and companies. There are many different benefits which have varying characteristics. Certain benefits, such as the child benefit, are paid out on the principle of the same benefit to all beneficiaries. Other benefits, such as the parents’ allowance, statutory sick pay, and pensions are determined on other grounds, for example income. Other benefits are paid to companies in the form of tax credits.

This report is characterised by a systemwide perspective on erroneous payments in the welfare system. The purpose of this all-inclusive study is to look at the interdependency of the public authorities within the welfare system and see the consequences of this interdependency on preventing and fighting crime. The focus is on incorrect certificates which are used to commit what we refer to here as welfare offences – benefit offences and fraud. The systemwide perspective also means that various benefits, such as statutory sick pay, pensions, and wage guarantees are included in the study.