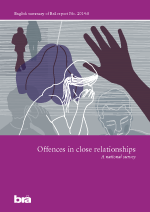 The results of a national survey regarding
offences in close relationships.

This report presents the results of a national survey commissioned by the Government and conducted by Brå, the National Council for Crime Prevention, regarding offences in close relationships. The survey was conducted within the framework of the Swedish Crime Sur­vey (NTU), an annual survey concerning people's safety and victimisation, carried out by Brå in the form of telephone interviews.

The purpose of the survey is to gain more knowledge of how widespread these types of offences are and to investigate their characteristics. The two main questions posed by the survey are

Other issues investigated include

The levels of victimisation noted among people appearing in this survey should be considered as minimum levels, as there is no doubt a large portion of cases that go unreported.