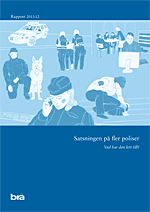 The investment in more police officers

Following the 2006 parliamentary elections, the new Centre-Right Swedish Government announced that the country would have 20,000 police officers by 2010. That involved an increase of more than 2,500 in the total number of officers during the intervening years. This report discusses whether the results have improved to the extent that can be expected given the magnitude of the effort.

The publication can not be ordered

The initial emphasis was on making the police more visible, gradually shifting towards a greater focus on producing better results. In these circumstances, the Government has commissioned Brå (the Swedish National Council for Crime Prevention) to evaluate the effort. An initial report is being submitted in May 2013, while the final report is due by 1 October 2014. An additional, interim report is to be published in January 2014.

Facts about the publication