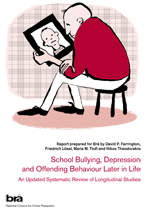 This is the question answered by the four authors of this report on the basis of a systematic review that includes a number of statistical meta-analyses. There are never sufficient resources to conduct rigorous evaluations of all the crime prevention measures employed in an individual country such as Sweden. Nor are there resources to conduct scientific studies of all of the effects produced by e.g. early riskfactors on later offending.

For these reasons, the Swedish National Council for Crime Prevention (Brå) has commissioned distinguished researchers to conduct a series of international reviews of the research published in these fields. This report presents a systematic review, including a number of statistical meta-analyses, of the impact of bullying on later offending and depression, with regard to both the bullies and those exposed to bullying. The work has been conducted by Professor David P. Farrington, Professor Friedrich Lösel, Dr. Maria M. Ttofi, and Ph.D. candidate Nikos Theodorakis, all of Cambridge University.

The study follows the rigorous methodological requirements of a systematic review. The analysis combines the results from a substantial number of studies that are considered to satisfy a list of empirical criteria for measuring the correlations of bullying perpetration and victimization with offending and depression as reliably as possible. The meta-analysis then uses the results from these six previous studies to calculate and produce a robust overview of the impact of bullying on negative outcomes later in life.

The systematic review, and the statistical meta-analyses, in this case builds upon a large number of scientific studies from different part of the world, producing highly relevant findings on the impact of bullying among children on offending and depression later in life. Although some important questions remain unanswered, the study provides the most accessible and far-reaching overview of this important issue that has been produced to date.

Facts about the publication