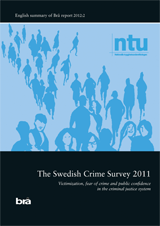 In 2005, the Swedish Government commissioned the Swedish National Council for Crime Prevention (Brå) and other criminal justice agencies to plan and implement an annual survey of exposure to crime and levels of public safety (the Swedish Crime Survey) in Sweden. The first wave of data collection took place in 2006 and the principal findings were presented in a report in 2007. This publication is a summary of the sixth report of principal findings, based on the sixth wave of data collection, which was conducted in 2011.

Knowledge of victimization, fear of crime and public confidence provides an important basis for developing and improving the criminal justice system and other agencies, and may help to reduce crime and increase perceptions of safety. The principal authors of the report are Åsa Irlander and Thomas Hvitfeldt,